Just realized that today is my six-year anniversary. No, it’s not the anniversary with my sweetie (which is now well beyond six years!), but the day I opened my Etsy store. At that time I was just selling off some items from my collections, but within a year I was buying stuff to sell, much to the consternation of my sweetie who thought it was a dubious venture.

But it’s turned out to be a fun, profitable, life-changing venture! Previously I had rarely set foot in a thrift store or went to yard sales. And I had never gone to an estate sale. Ever. I’ll never forget my first one…I was number 37 on the signup list and had to wait to get in. And when I did…oh boy…what a heaving, madhouse of bodies. But I loved it. And I discovered I loved researching items. I’ve learned about Mexican pottery, designer costume jewelry and mid-century Danish cutlery. I know to keep an eye out for micro-mosaic picture frames, Italian Bitossi pottery and interesting rusty cast iron bits. Truth be told, I wish I had done this sooner!

Will I still be selling stuff six years down the road? I don’t know. But my love for vintage things will never change. That I do know. 🙂

And what am I buying these days??  Not much!

I paid well under $100 for my painting so I believe it has the chance for a reasonable profit down the road. I find it appealing so I’m in no hurry to sell it.

While my taste in art is eclectic, I steer clear of “collectible” art. It just doesn’t appeal to me or hold its value. For example, a neighbor on Nextdoor.com was trying to find out the value of two Thomas Kinkade paintings she wanted to sell. (She had seen ones priced online for $300-$30,000.) I offered to find out some sold comps on Worthpoint for her. Her paintings were actually numbered prints, one from a print run of 20,000! It wasn’t selling for much (mostly under $100). She’s going to do more research but I think in the long run she’s going to be disappointed with what she’ll get for these. Here’s the other thing, despite the artist’s untimely death a few years back, the Kinkade enterprise is still cranking out these prints and canvases by the boatload.

Back to the subject at hand, I did find a few goodies at Goodwill today. Couldn’t pass up this colorful ceramic 1950s ashtray. Isn’t this fabulous?

And I spotted these chunky, hunky, petrified wood bookends. They are a rather bland golden brown on the polished, cut ends, but have a rough textured bark side that is so intriguing! Trying to find out what kind of tree these came from. Some of the colorful ones sell can sell for $300-$500. I’ll be listing this pair for $100.

And I finally found another cutting board to refurbish…maybe! It’s a Dansk cheese board but its cheese cutting wire tool thingy is missing. Is it worth it?? 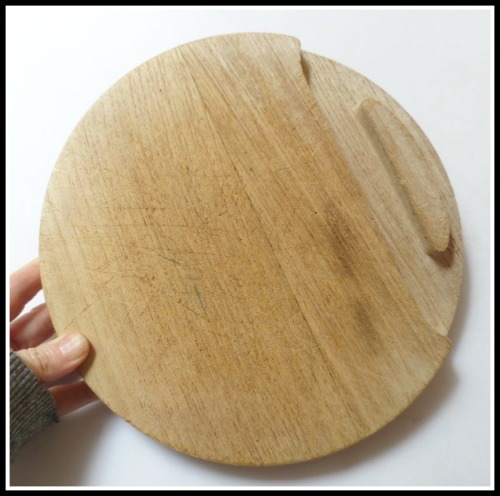 So I’m not buying much. (I am embarrassed to admit that I still have gobs of wonderful crystal (glasses and decanters), some bought over a year ago, that I have yet to list! Along with jewelry, baby clothes and books.)