I was at the thrift store a few days ago, which granted, is not an unusual experience for me (I’m there at least three times a week), but what I found was. Unusual that is. Unexpected.

I almost didn’t bother taking a closer look at it. It was so big that I knew it would be a nightmare to ship. An absolute nightmare. But I couldn’t resist. I picked it up and dang, while I’m not much for hunting scenes, this engraving was seriously old and seriously good.

I just couldn’t leave this behind!

Back at home I got down to business researching it. Here were the written clues on the piece:

Here’s what I found out…

Samuel Alken (1756-1815) was an English artist with a penchant for aquatints. Of his children at least two became artists as well: Samuel Jr. (1784-1824/25) and Henry (1785-1851), who became the most prolific and commercially successful. (You’ll find many Henry Alken engravings available for sale.)

George Maile (1800 -1842) and Thomas Sutherland (1785-1838) were artists known for engravings. In 1823 the pair produced “a series of four magnificent colored aquatint engravings of sporting subjects measuring 27.5 by 11 inches….” Subjects included: Coursing, Fox Hunting, Stag Hunting and Hare Hunting. They were “magnificent impressions of an excessively rare set with full margins.”

My engraving fits those measurements perfectly and includes the full margins. I believe it is part of that London 1823 Maile and Sutherland series hand-colored by Samuel Alken Jr. shortly before his untimely death.

I have examined portions of this with my jeweler’s loupe and it certainly shows evidence of hand craftsmanship. There is almost a naive quality in some places. If I were to pull away the backing paper and examine the paper I’m sure I would be able to learn more, but I don’t think I need to.

I’ll admit when these pieces of information came together I literally did a happy dance–a very goofy jig as my youngest daughter can attest too.

My husband wondered, “Who donates stuff like this to Goodwill?”

Darned if I know. I’m guessing it was part of the “refuse” from an estate. It’s such a huge job clearing out a home after a death that many relatives just want to be “done with it” and tons of stuff gets donated or thrown out.

Regardless I was thrilled to find this almost 200-year-old piece of art at my neighborhood thrift store. (My youngest daughter joked, “It’s almost like you know what you’re doing!”) The engraving is not in perfect condition, but who is at 197 years old! I’m not sure yet what I’ll list it for as there are fewer comps for Samuel Alken Jr. pieces and for items in this series, but hopefully with a bit more research I’ll figure it out. 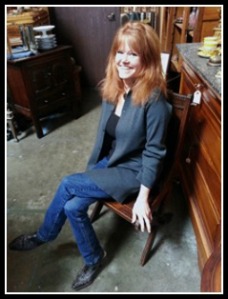 Found these antique barley twist candlesticks at a boutique thrift store. In a word they are fabulous. Now for sale in my Etsy store. #lionandlambvintage #etsyshop #antiquebarleytwist #englishantiques
A sweet carnelian and enamel pendant. Likely a 1950s Chinese export. Found on a very chilly day at the flea market. Now in my Etsy store. #etsyseller #etsyseller #fleamarketfinds #lionandlambvintage #chineseexportjewelry #carnelianjewelry
This small ring was on a sterling silver charm bracelet I bought last year. Turns out it's a 14 kt gold baby ring (size 3) with a tiny diamond! Likely an antique, it would make a great heirloom midi ring. It's in my store for $90. #etsyseller #etsyshop #lionandlambvintage #babyrings #victorianjewelry #midirings
Found this 1950s Rialto lucite purse at my local thrift store!! Holy smokes Batman! Love it...how about you? Will put in my Etsy store in a few days. #etsyseller #etsyshop #thriftstorefinds #lucitepurse #rialtopurse #1950spurse

Thanks for stopping by. Copyright © 2013-2020, huntingforvintage, Karen Ratzlaff. All rights reserved.