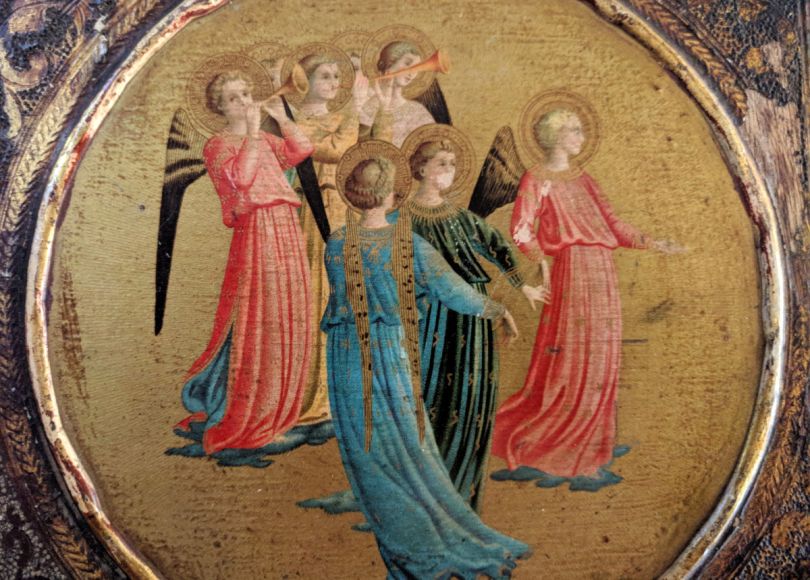 I’ll be honest it’s been hard to concentrate these last few days as we wait for the final U.S. presidential election results. Sleep is elusive and my stomach has been in knots. I’ve been trying to calm myself with classical music (Mozart this morning), short prayers and being outside in the garden. And of course, going out hunting for vintage things is deliciously distracting!

Here are a few of the things that I’ve been buying lately for my Etsy store, Lion & Lamb Vintage.

A neighborhood thrift store find, I haven’t decided if this is striking or “so ugly it’s good.” There is a lot going on with the twisted handle and applied elements and wild glaze. Still it’s so different that I think someone is going to love it.

Sadly, my two hours of research have yielded nothing on its markings.

I bought two vintage Italian Florentine plaques from an eBay seller. Purported to be hand painted, I think it is more likely they are lithographs that have been decoupaged on though I need to take a closer look under magnification.

This plaque had the inscription “N. G. Fabriano.” After a bit of research I discovered the handsome fellow below is part of a painting titled “Adoration of the Magi” by Gentile de Fabriano.

This image of angels below is from a 15th century painting “Coronation of the Virgin.” Some of the plaster work (over the wood) and the gilding is chipped but I find that oddly more appealing.

I’m going to hang onto these for a while!

Found these modern brass ram bookends at my neighborhood thrift store. Gosh they were priced way up (almost $20!), but are heavy, in good condition and the type of thing that sells for me.

I had trouble finding any like them until I found this ad, but it turns out the company is no longer selling them. As you can see they originally sold here for $124.99.

I bought this tramp-art style chip carved wood candelabra from a fellow vintage reseller months ago because I thought it was absolutely fabulous. I still do, but I realize I’ll never burn a candle in it, so I’m letting it go.

So when I spotted this large 10.5″ diameter silverplate compote at my neighborhood thrift store and it ticked all the boxes I had to get it!

The three stars in a shamrock is the Barker Bros mark for their silverplate items. Barker Brothers started business in 1801 in Birmingham, England. They merged with Ellis & Co. in the 1960s and went to private ownership in the 1980s.

I’m going to spend a little more time in research trying to nail down its era before I set a price and list it. Right now it seems to be 1900 to late 1920s.

So just a few things, but I’m happy with all of them. Time will tell if I made wise choices!

Hope you all are staying safe and healthy and coping with life in your neck of the woods.