Amidst all the estate sales and yard sales advertised for this weekend there was one that captured my full attention. It was advertised as an “Industrial and Vintage Decor” yard sale. Perfect! Just perfect. Look at all the great stuff they had… 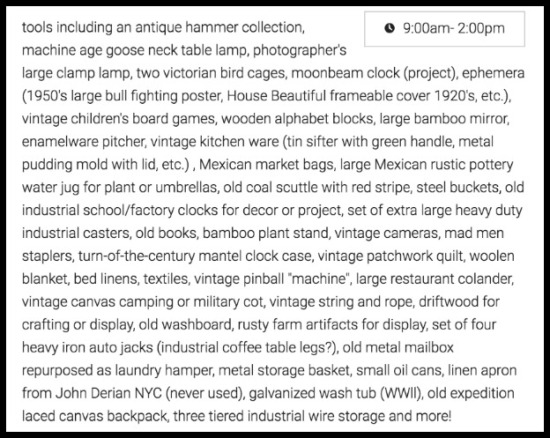 I was really excited and by 8:30 a.m. I was at the ATM picking up some cash. (Optimistically I took out $200!) I arrived at the yard sale address about 15 minutes before it was due to open and sat in my car waiting, but then I saw another woman looking at stuff on one of the tables so I got out of my car and headed over too. The woman running the sale had just set down some tools on a table and I asked if she was open and she said yes. Alrighty then!

But I soon realized that a lot of stuff I had seen listed in the ad, stuff I wanted to look at–the quilt, the vintage linens, the old cameras, the vintage board games, the wooden blocks–were already gone. Obviously other buyers had come and gone well before 9:00. Drat those really early, early birds!  Drat! Drat! Drat!

Well, I did scoop up all her antique, rusty, cast iron hammers. I think these were the tools that she had just set out. (So maybe in reality these were the items there I was destined to buy! Or is that too fanciful?) I really like this kind of stuff. I especially like the one that advertises “Lewis Fuel & Feed Co.. Phone 83 for Quality Coal.” 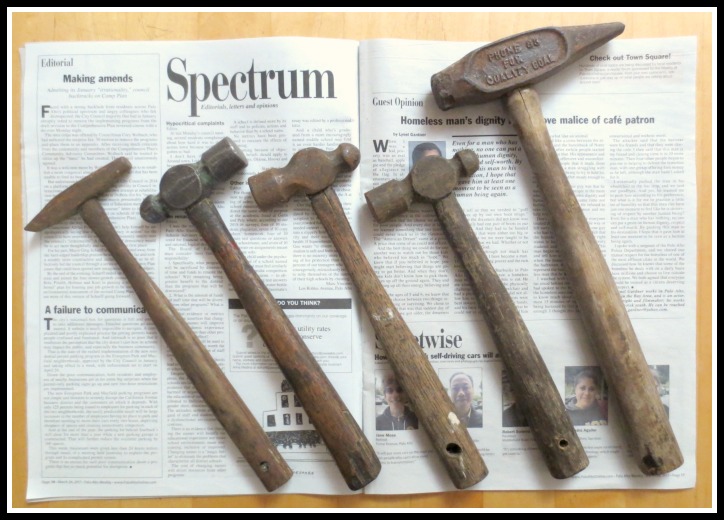 My husband thinks I was crazy for buying these. Maybe I was. I doubt there is a huge market for them. How many people are out there saying, “Man, I need to buy me an old, rusty, beat up ball peen hammer”?

On the other hand, if I like them, I’m thinking other people might too. These are simple, well-crafted items that show a lovely patina of decades (and decades) of usage and are still usable today. I may even keep one of them. The smallest one looks to be a prospector’s or tinner’s hammer and would look great with my beat-up hand rake. Don’t you think?? 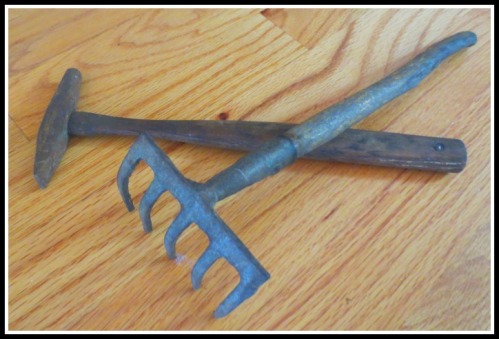 And did you know there is even a hammer museum? It’s a tiny spit of place in Alaska and looks delightful!

Other than the hammers I only bought a couple of books. One being a 1931 falling apart atlas that could be used for art projects. The colors of the maps are still vivid and crisp all done in turquoise, white, light yellow and orange.

And a cute illustrated 1940s kids book on safety.

So not a huge haul. (Was hoping for a lot more!) And no home runs. But still I’m glad I went. And it’s a lovely warm spring day and I’m going to go sit outside and soak up some sun. 🙂 And maybe, finally, finally, get rid of this lingering cold!