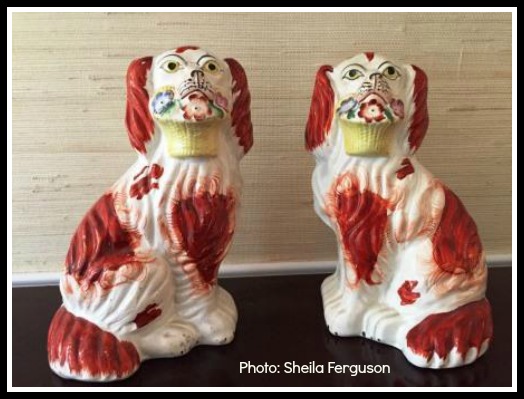 After a lovely chat with a friend over coffee on Saturday I headed to some nearby boutique thrift stores for a quick browse. I don’t often buy much in any of these stores because the prices don’t lend themselves to reselling. But still it’s fun going every now and then.

Today I spotted an appealing dog jug sitting on the jewelry counter. I picked it up and gave it a good look. It looked like Staffordshire pottery, but I wasn’t sure. And it was pricey.

I set it down and roamed the rest of the small store.

Then I went back to give the jug another look. It was heavy, hand painted and had signs of age, but was it worth the price? I set it back down. As I wandered around the store again I decided to do a quick search on the jug.

Hmmm. It’s a “King Charles Spaniel begging toby jug” and even if it is an older replica, it might have a little meat on the bone…maybe! I dithered for a bit longer and then went over and picked it up for the last time and headed to the checkout counter. Well, honestly, it is a bit of fun, isn’t it?

I’ve been researching Staffordshire dogs for hours and here are some of the potential repro signs. There are sites who suggest similar signs and other sites who contradict some in this list!

Here’s what I know about my spaniel:

I’m sure an expert could look at this and immediately know if it’s the real deal or not but I’m still struggling with it. I know it does has some age, but it has mixed details, some which point to an authentic Staffordshire pottery piece and others not. Poop!

The bottom line: In all honesty, I can’t sell this as an authentic Victorian Staffordshire pottery jug because I’m just not sure, but I can sell it as an “old Staffordshire-style jug.” From a profit standpoint it wasn’t the most astute buying decision, but that’s the gamble in this business. Sometimes you have to take risks!

How about you…take any gambles recently??